Sorry for the not very good, punny title – I had to. This is the girl who once spent half a day trying to turn the title of her qualifying paper into a good Star Wars pun (I got pretty close!).

I wrote my first post about an exhibition series at the Aldrich Contemporary Art Museum in Ridgefield, Connecticut, united states, because I perceived in the promotion of the show a seeming gender disparity, in which “solo exhibitions” were all by male artists and women artists only had  “projects.” I expressed my concern to the museum and received a lovely and thoughtful response, which concluded with the hope that I could attend the opening, to which I responded, “Oh! I could actually do that!” I have my car with me and Ridgefield is just over an hour from the city (though if you don’t, they seem to run a shuttle from PS1 for openings). And I have a great friend in New Haven who could meet me there; what a lovely excuse to see her!

In terms of my concerns about the gender disparity, the whole thing was more like a group exhibition, in which certain galleries were given over to a series or several works by a single artist–the so-called “solo exhibitions.” The “projects” were just individual artworks that tended to take up more  liminal spaces like hallways and atria, but, as the exhibition director had said in his email to me, they in no way seemed subordinate to the solo shows.

That dispensed with, I very much enjoyed the exhibition opening and the art therein (as well as the company!). Hank Willis Thomas of course delivered, combining images of black athletes (wearing visible Nike and Under Armour logos) with images of cotton-picking, lynching and shackles, in large photographs with a gloss, visual language and blank black background reminiscent of advertising.

There was a video (vertical format, so the tv had to be turned sideways, which was amusing) with similar imagery. I’m not sure the video did anything that the photos didn’t, though to be fair I couldn’t hear its soundtrack, due to a performance taking place at the time.

The performance was by Jane Benson. The concept was touching: two musicians, each playing one half of a cello, one in a blue state (live in Connecticut), the other in a red state (Virginia), Skyped in. The piece they played, composed by one of the cello players, was less moving. Either because it was avant-garde music, or music as a part of conceptual art, the composition was screechy. I would have rather heard, and it might have been more interesting to see if two halves of cellos could have made, something melodic. 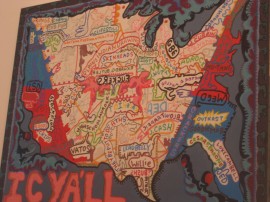 Jonathan Brand’s paper-made Mustang and Pedro Barbeito’s mixed media, multi-image paintings dazzled with their impeccable construction. Brad Kahlhamer’s katsina doll-like figures made of found objects and Risa Puno’s giant cooperative labyrinth game were charming and whimsical. Brian Knep’s interactive installation memorializing oft-overlooked confederate soldiers was as thought-provoking in its content as it was fascinating in its movement-capturing technology. See this video I took, with the lovely Laura B. demonstrating.

My overall takeaway was a bit of a revelation about my trouble connecting with a lot of contemporary art, particularly of a political nature. Many of these artworks had a political message, but first and foremost, they were beautifully constructed and aesthetically engaging objects, which helped make their message more relatable–an emotional engagement, as well as just an intellectual one. You didn’t have to read an essay on the political context in order to appreciate them, but you could if you wanted to.

And a bonus: though I want to and soon will be moving away from New York, because I would like to be somewhere new, it is nice to be reminded about the wonderful surprises awaiting around every corner, particularly when you get out of your neighborhood bubble. Spotted on far east 116th St.: 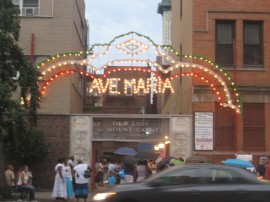 A woman waiting for the bus informed me that it used to be an Italian church/festival that has now been adopted by the Haitian community as the neighborhood evolved–a lovely thought.