I just wanted to address a point toward the end of the article I just posted about Tatzu Nishu’s living room around the statue in Columbus Circle. One board member of an Italian-American cultural committee criticized

the Bloomberg administration’s silly revisionism when it comes to public spaces.

“The plans seem to hide the Columbus statue for no reason whatsoever,” he said.

First of all, I love that they called it “silly revisionism.” Second, I hate to use the word philistine, because it makes me sound like a snob, but to me this does seem like a failure to see the ways that art can enchant or re-enchant what was already there, as the Gates did to Central Park, and Olafur Eliasson’s waterfalls did to lower Manhattan/Brooklyn/Staten Island.

This is a bit like anger at displays of contemporary art, like Takashi Murakami, Jeff Koons, and now Joana Vasconcelos, at Versailles, though that frustration makes a bit more sense. As my museum colleagues who are more interested in history than art pointed out, they went to Versailles, perhaps only once in their lives, for the historical experience, only to find contemporary art in the way. To them, I counter with the fact that, unfortunately, Versailles sold most of its historic furniture. Most rooms are unfurnished, they are not like many other historic houses that are furnished and decorated so as to make it like you are stepping back in time.

I may have the opposite bias, as a contemporary art fan, but I think Versailles does an excellent job placing these large-scale contemporary works in ways that enhance both the setting and the art. I love how the baroque-ness of Murakami’s work is brought out by the baroque ceiling above it. As the first female artist to exhibit there, Vasconelos’ high-heeled shoes made of pots point to the history of the women at Versailles as well as before or since–the enforced confluence of glamor, pain, and domesticity. 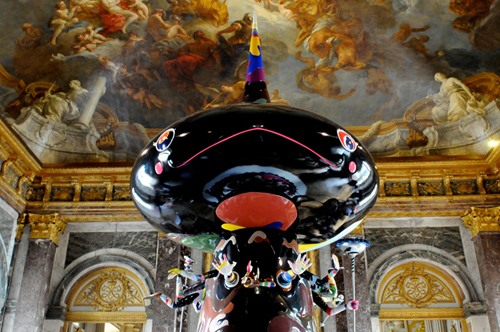 One thought on “Quick Follow-up”