I first became familiar with Niki de Saint Phalle through an exhibition on female pop artists that I worked on at the Tufts University Art Gallery. She has an interesting history: she was gorgeous and had been a model, was a friend and prodigy of Marcel Duchamp, and eventual consort of Jean Tinguely (of the self-destroying machines). Her particularly Dadaist gesture involved creating assemblages of objects with paint pellets in them, and then shooting them, perhaps her own sort of violent protest against the patriarchy still ruling the art world. 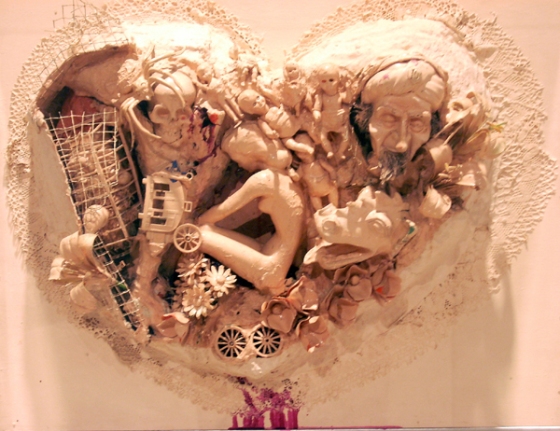 Later, her (essentialist) feminism was expressed through her “Nana” figures, curvy female figures in bright colors and textures, emphasizing, celebrating, their fecundity, most famously in a giant figure whose womb the visitors could enter–and exit–through her vulva.

These figures continued to be the bulk of her work until her death, and ended up being manifested in many a sculpture garden and outdoor plaza, including a recent installation on Park Avenue in NYC, written about in a NYTimes article about this summer’s public art offerings:

Back in the ’60s, when Ms. de Saint Phalle was developing her aesthetic, figures like these had a goofy, liberationist vibe. But the works here seem woefully outdated, more tacky than visionary.

Since I was going to MoMA, I decided to take a detour up Park Avenue afterwards to check these out myself, along with the John Chamberlain sculptures also mentioned in the article, which he originally sculpted in miniature in aluminum foil, and which retain that same texture:

And I enjoyed the de Saint Phalle figures; there’s definitely great joy in them, and I don’t think that’s a reason to discount them as Art with a capital A.

However, I worry that sometimes I like things because I want to, and that this may be one of those times. Before I knew about Niki de Saint Phalle’s feminist and art historic credentials, I might not have liked these as much. I might have agreed they were tacky, or enjoyed their lightheartedness but not taken them so seriously. An artist friend of mine mentioned the idea that she did not want to have her personal, instinctual taste–the immediate sense of liking or not liking things–affect her judgment. This may be the opposite: my foreknowledge, tied to my judgment, affecting my taste. But I guess we can’t really help but do otherwise.

Nevertheless, it’s definitely better than the parade of pretty uninspiring public art that’s been installed on the Upper West Side,on the islands on Broadway. It started with Tom Otterness, whose subway platform installations had a certain cuteness initially, but after you’d seen them for the fifty billionth time, the characters lose their charm. Since then it’s only gotten worse.

UPDATE: I have to add that I walked by Columbus Circle and saw the construction of the living room around the statue of Columbus, which I mentioned in a previous post.

One thought on “From Dada Prodigy to Tacky Plop Art?”