Sorry for another brief hiatus. I was in California, absorbing more nature than culture: a county fair, complete with farm animal auction ($1000 for a turkey!); a hike in the Sierra-Nevadas with spectacular views, which alas I failed to capture on camera (image search Lake Winnemucca if you’re curious); fresh delicious vegetables from my own (well, my aunt and uncle’s own) backyard.

But before retiring to the country, I took in a bit of art (I’m me, aren’t I?): the Man Ray/Lee Miller show at the Legion of Honor, which I’d read about back when it was at the Peabody Essex Museum, but didn’t end up making the trek from Boston to see. You’re likely familiar with Man Ray, but perhaps not Lee Miller. She was his girlfriend for awhile in the ’20s and ’30s and an accomplished photographer in her own right, as well as quite a beauty–she once rivaled Greta Garbo for the title of the most beautiful woman in Paris (where she, like Ray, was an American ex-pat).

The exhibition explores the ways they collaborated and inspired each other, and provided a museum-worthy reason to explore Miller’s independent work, which of course is often overlooked (though Ray’s works still outnumber Miller’s in the exhibition). The galleries are organized so as to provide a narrative: before they met; while they were together; the break-up aftermath (which inspired some of Ray’s best known works); and, eventually, their rekindled friendship. This made prefect sense and told a clear story, except that the works in the galleries themselves didn’t always match these narratives, particularly in the inital “before they met” gallery, which included portraits they took of each other, and films that Ray’s friend Jean Cocteau made with Miller as muse.

Much of the exhibition focuses on photography, and includes several “rayographs” as well as solarized photographs, an influential effect that, it turns out, Miller accidentally discovered when a rat scrambled over her foot in the dark room, causing her to switch on a light mid-development; Ray and Miller then perfected the technique together. 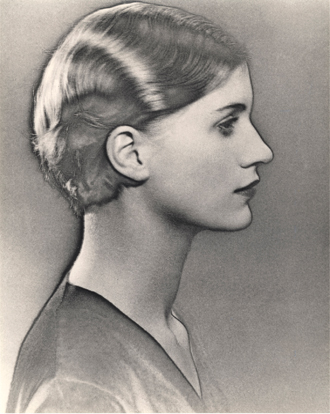 While Ray’s photographs exhibit important technical developments in surrealism, I was actually more impressed by the beauty of Miller’s photographs of Paris. They are experiments in aesthetics rather than technique or concept, using unusual angles and dramatic natural lighting to turn a street scene into an abstracted composition of textures in black, white and grey. A wall label phrased these as “‘ready-made’ surreal scenes… found on the street… that would come to life through imaginative viewpoint and framing.” I thought that perfectly phrased what I was trying to articulate in my head about extraordinary photos like this one: 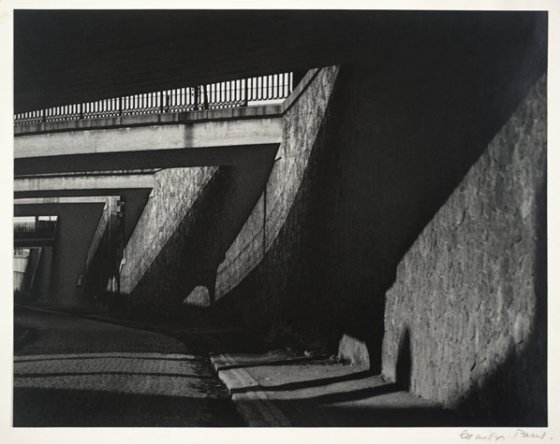 As I mentioned above, the aftermath of their break-up greatly affected Ray and inspired some of his best known works. It is Miller’s lips that hang both erotically and ominously in his best known surreal landscape painting. It is Miller’s eye pasted on the metronome that is Object to Be Destroyed. Fascinatingly, subsequent editions were called Object of Destruction, Last Object and, most suggestively, Indestructible Object; it turns out that though Ray intended to cathartically smash the object with a hammer, he could never actually bring himself to do so.

In the gallery with these works is a letter Ray wrote to Miller, after she abandoned him and moved back to New York. He practically begged her to forgive him for being a possessive and jealous jerk, but she stood strong. She apparently was quite a feminist for her time. One illuminating work in the exhibition was a photograph Miller took of a severed breast from a radical mastectomy, and sent to a fashion magazine (the photo, not the breast) as a protest of the objectification of the female body (though Miller often worked for magazines as both a model and a photographer). Miller’s tenacity was also on display in a gallery showing photographs she took as a war correspondent during World War II, including photographs of Nazis who committed suicide at the approach of the Allies.

Lee Miller and Man Ray rekindled their friendship in the U.S. in the mid to late forties, as illustrated in the exhibition by artworks Ray sent Miller, particularly during her bout of post-war depression. A very memorable image closes out the exhibition, of the artists together at an exhibition opening in 1975, smiling at each other with knowing intimacy, displaying the kind of lifelong connection inevitably forged in a passionate love affair. 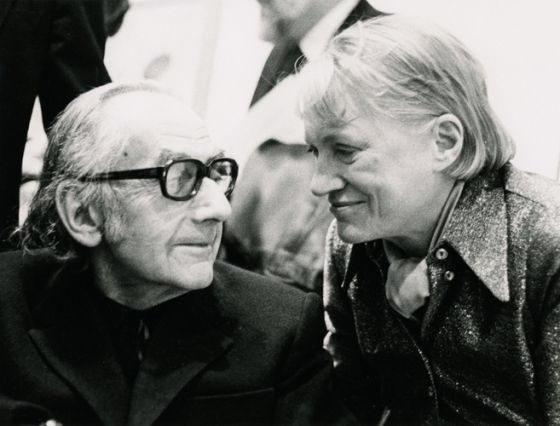 One thought on “Return of the Blogger – Legion of Honor: Man Ray/Lee Miller”